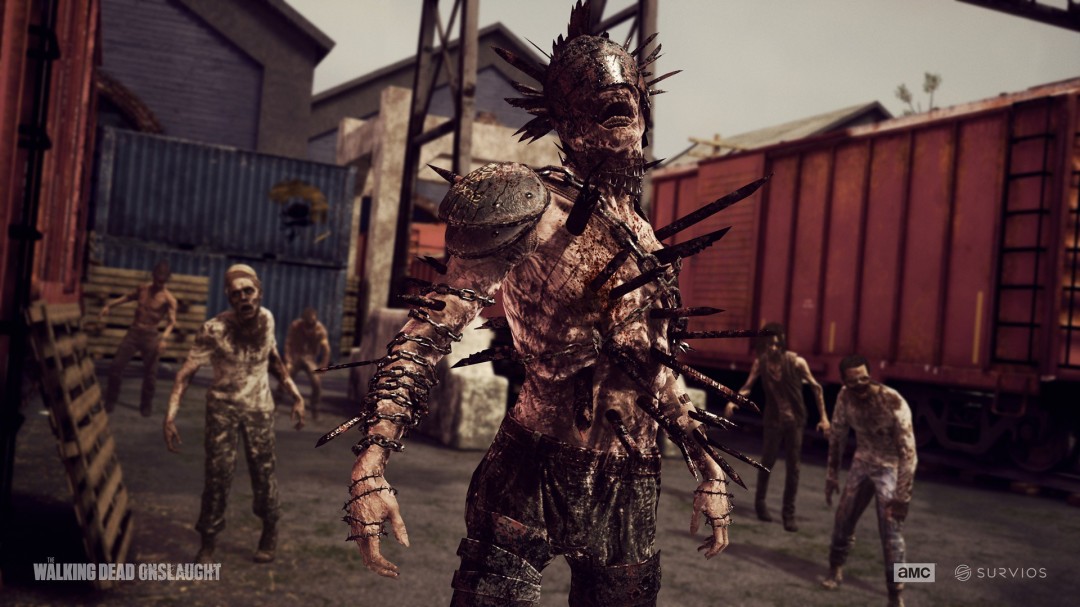 The Walking Dead Onslaught was developed by Survios and is available on PC VR and PS VR.

The Walking Dead Onslaught takes place in the TV series Universe with fan favourite characters such as Rick, Darell, Carol and Michone. Other TV characters make an appearance as well but are not playable. The story is set between the large time jump in the TV series and tasks you to rebuild Alexandria by going on supply runs and missions with the characters. The story missions are told in a flashback type setup while being narrated by Darrel with Rick asking questions as you progress. The story was in keeping with a typical The Walking Dead episode, it wasn’t the most gripping story but it did keep you pushing on to find out more.

This is where the game becomes a real mixed bag for me, it’s so difficult not to compare it to The Walking Dead Saints and Sinners as they both have so many similarities but also glaring differences. Each has both positive and negatives, in Saints and Sinners I felt that the stamina was a pain sometimes, two-handed weapons took getting used to and so on. The Walking Dead Onslaught, however, the melee weapons are a ton of fun, even with two-handed weapons it’s easy to use and I felt bad-ass hitting the zombies with a hammer or going nuts with a hammer in a small crowd of zombies. The guns though, goodness me, I’m so sorry to say this but the gunplay is just odd, it works, the aim, the feel it all works but WHY does it take multiple headshots to take down a zombie? You can upgrade the weapons but it makes no sense to me how even a massive rifle can’t take down zombies with a headshot, it just got to the point where I didn’t want to use a gun at all. Sadly the scavenger runs at first sounded cool, procedural levels in which you collect supplies, weapons and upgrades with different events happening through-out the play-through, I was so up for this but mostly it was just a red cloud with a line representing a horde, now at first I thought, “okay this is fine, it sounds cool let’s see what happens when I get caught, maybe a ton of zombies hit and I have to fight them off in a new apocalyptic setting”. No, sadly I was wrong, the cloud just makes your health go down, nothing really special about it. Sure the adrenalin you feel to get everything quickly is great, disposing of the zombies that are in the map is fun enough but then it feels completely let down by that event. Another let down is the lack of interactivity with the environment, in Saints and Sinners you pick stuff up all the time, whether it be junk, opening cabinets, it’s fantastic but in Onslaught sadly it’s just aiming your hand at something and it picks it up. By no means is it completely bad at all but a bit of interactivity in VR games goes a long way. The Walking Dead Onslaught could be so much better with tweaks here and there. I was so disappointed with it in the end and I hate being negative about games but I have to be honest here. Luckily some things get it right but some issues need dealing with.

The zombies look great, the design of the game is good, the characters look great, the quality of the levels is true to the TV series look and feel, stabbing a zombie looks as realistic as it can be for a fictional zombie apocalypse, it gets it right in its design, I enjoyed exploring these environments and it felt like I was able to go beyond the TV show and explore what was out there. The sound design is great, while some of the voices don’t match up perfectly it was a good enough substitute and was interesting to interact with these characters, the music also takes after the shows theming and work well when you’re in incredibly tense situations.

By no means is The Walking Dead Onslaught a bad game, the developers did a great job staying true to the TV show. I had a lot of fun in some sections, the second mission especially while chasing a police car, I had a hammer on hand and just went crazy on the zombies and it was really good. I think The Walking Dead Onslaught sadly made some questionable decisions along the way and chose the wrong one, these can be fixed though, this game is in no way awful, I just think it could use a bit of modifying. The event with the red zombie fog, get rid of that, replace it with the zombie numbers triple and they keep on spawning, guns that don’t headshot in one, make sure they do. Interactivity in VR titles is a must, we need more. There are little fixes here and there that could improve it hugely. For the price, I think this needs reducing a bit to be worth it but I think if Survios is dedicated to fixing this game, then it will be up there with The Walking Dead Saints and Sinners.