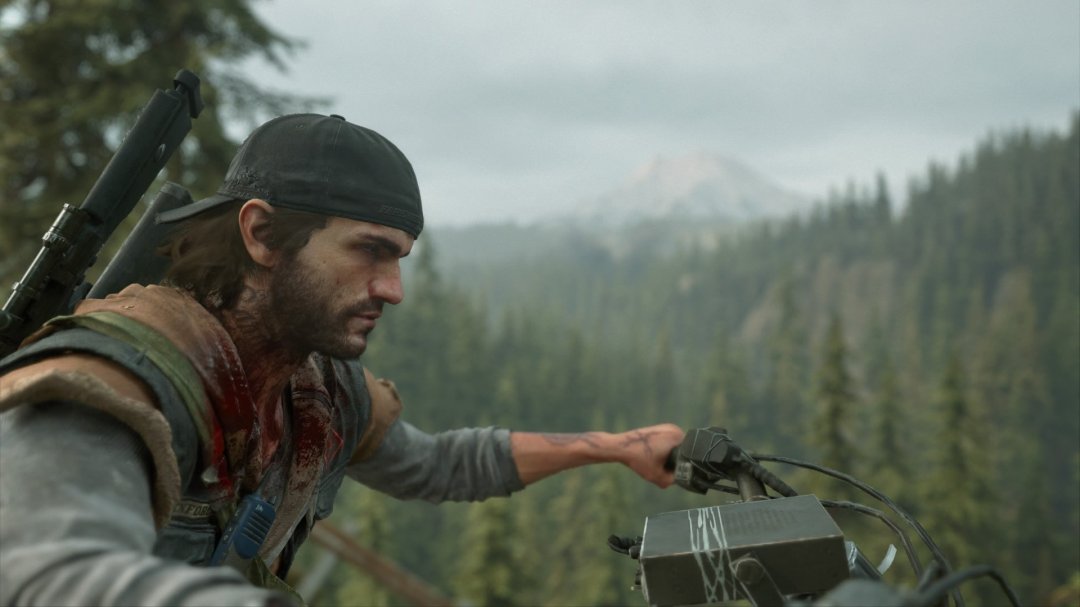 You are Deacon St John, former biker, now mercenary. Faced with nothing but grief, regret and anger at the death of his wife Deacon must survive with all these emotions and the threat of Freakers and people at every corner.

Days Gone features an array of characters through-out the story-line in which you’ll interact with, the feeling I got from this was a GTA, Red Dead Redemption kind of style where you’d visit your contacts if they have a mission for you. This kind of system works well for the game as you ride around in the lovely setting of apocalyptic Oregon on your motorbike. While the story has its engaging moments, it also is filled with moments that leave you feeling unsatisfied. I played Days Gone in the room with my partner as we’re both really into the apocalyptic genre and we love zombies. Our opinion was always, why didn’t they do a dark twist here, or do this there type of thing. I was left feeling quite dissatisfied at some points but also overjoyed at others. It goes the same with the characters, at times I got really attached but then little things here and there sometimes broke that love of the character. Though I do love Boozer, I had a soft spot for him especially in the one story-line involved in helping him. I felt it was done beautifully and you could honestly relate to it.

If you want to find out more on why I was slightly disappointed with the story that discusses it in more depth, you can do so HERE. Be warned, major spoilers feature in the article.

The game play for me was the highlight. While Days Gone doesn’t do much new, the horde system alone sells it. In Days Gone you’re faced with Freaker hordes, you’ll meet more along the way in the story-line. The world contains 40 Freaker nests, at night they’ll roam several areas scavenging for food, in the day time they’ll sleep in there caves or the odd building. One of the tasks is to eliminate them all and boy is it one hell of a challenge. Days Gone has achieved giving you such a sense of fear from these hordes, they don’t mess about and all it takes is one mistake to get completely torn to shreds. The first time I was at a Nero checkpoint, the electricity was back on and suddenly a horde emerged slowly across the path beneath me. I was stuck on a roof with no ammo and no fuel for my bike. The feelings that moment gave me was a feeling a game hasn’t given me in such a long time. Days Gone really does shine in its design and its premise on the apocalypse.

Throughout Days Gone are a massive array of weapons to suit your play style and to suit the task. The tasks you’ll face on your journey range from taking out bandit camps, destroying hordes, collectables, infestations, Nero checkpoints and the list goes on. Days Gone is full of content weighing up at a hefty 60 hours to do it all and if you go for platinum it may end up taking more time. If you just want to finish the story and be done with it, it should take you around 30 hours. With Days Gone though I recommend sticking to it and seeing what the game has to truly offer. It takes a lot for me to feel like completing the trophy list and grabbing a platinum. Days Gone just had me gripped for weeks, I couldn’t put it down and even after achieving the trophy I’m just so disappointing that I have no more tasks. After Deacon is fully upgraded via finding injectors in Nero checkpoints, the tasks are much easier, including the hordes but still offer plenty of challenge but again with no New Game Plus, I’m done until DLC comes out or perhaps upping the difficulty level later on.

Days Gone though also sadly suffers from quite a few bugs though I have to hand it to Bend Studio, they’ve released a patch almost everyday that has fixed some of the big bugs. Some of the issues range from slow frame rates, audio issues, loading textures issues and more but they are being fixed fast.

Days Gone’s Oregon setting is absolutely stunning, even in the apocalypse you cannot fault the views. Every building is also enter-able and to me each and every one felt like it had unique detail from the others. Driving your motorbike through each region is a stunning experience and one of the best I’ve had this year in gaming. Sadly though apart from a couple of characters, most of the animations feel a bit off in facial features but it doesn’t deter from the experience overall.

The soundtrack, the Freakers screaming, the people yelling it all felt quite realistic. My only trouble is when I first started the game it seemed that Deacon would scream when I was in a stealthy situation and it seemed he had the odd anger explosions from no where which really just made me laugh more than anything. He’d be calmly chatting to Boozer on the radio and then suddenly, “GAWD I GOTTA COME BACK AND CLEAN THESE DAMN NESTS”. Deacon is an angry man.

Days Gone was thoroughly enjoyable, one of my favourite so far, it’s just really sad that the story lets it down a little bit and some of the issues do break immersion, especially when in the second lot of regions the frame drops become quite an issue. Bend Studio has done a brilliant job, they ended the game well and I do hope there is a sequel, I feel like Bend Studio will take into consideration on what needs fixing next time round but I truly believe Days Gone is a really good Sony exclusive.