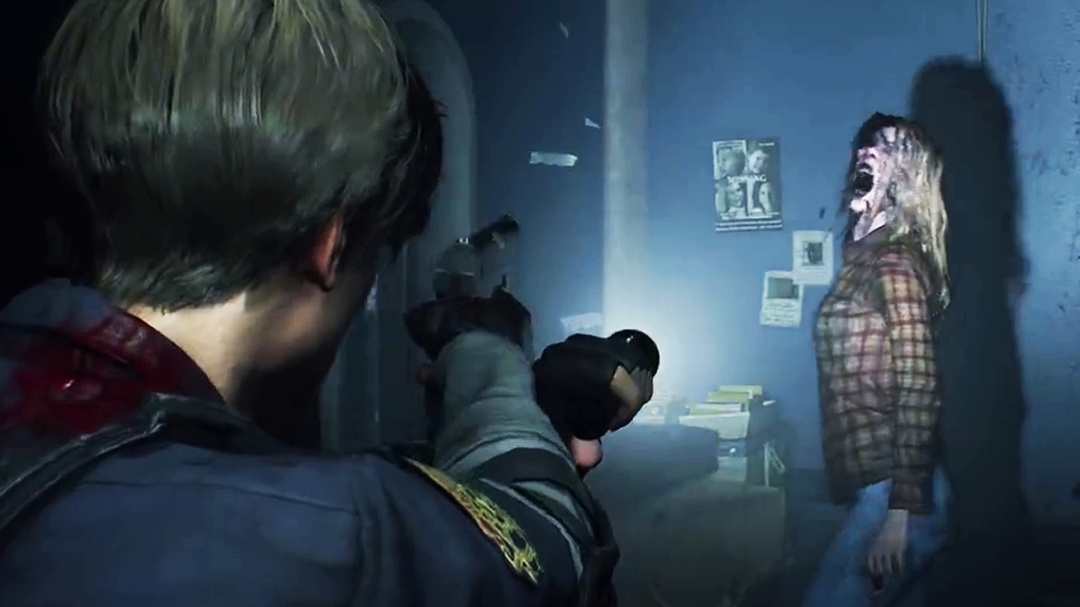 Resident Evil 2 Remake is a survival horror developed by Capcom and was released 25th of January 2019 on Xbox One, PlayStation 4 and PC.

Resident Evil 2 follows the story of Leon Kennedy, Claire Redfield and Ada Wong in a bid to escape the Racoon City Police Department after Umbrella a pharmaceuticals company accidentally releases a biological weapon that creates zombies and other horrific creatures. The story at first seems fairly basic, the further you go the more Resident Evil 2 displays its many brilliant twists and turns that I won’t spoil for you but it stays true to the original source material back on the PlayStation 1.

At the start of the game, players are given the choice to play as Leon Kennedy, Claire Redfield’s. Each campaign opens up more areas that were inaccessible before, changes up the puzzles and opens up new storylines. which keeps it all fresh. Not only that there are two bonus campaigns one which features Hunk and the other that lets you play as a Tofu. Like in the original, Leon and Claires campaign intertwines with each other but leaves out the original zapping. Zapping in the original game displayed as four separate campaigns, Leon had 2 campaigns, A/B Claire also had A/B. If you played Leons campaign A and then after you had finished went onto Claire campaign A, everything you did in Leons would affect Claires. This time around Capcom wanted two main campaigns one for each character that got straight to the point and cut out the long backtracking moments that the original contained.

The campaigns are both lengthy each being around 6 to 8 hours long and during this time, without being frustratingly difficult but equally providing a decent enough challenge which really gave a good sense accomplishment when I finally did it. Not only do they manage to provide an absolutely tense storyline but they manage to recreate the horror of the past and make it just as terrifying in the year 2019.

Resident Evil 2 Remake has ditched the camera angles and controls of the past and gone with a more refined version of Resident Evil 4’s more action orientated camera and controls. In doing this it still keeps the survival horror feel. This didn’t at all deter from providing an experience like the original it just made it all the more better for new and old players alike. Other features such as inventory management, progressing through levels, puzzle sections have mostly stayed the same with little improvements here and there for quality of life purposes.

Venturing through the Racoon City Police Department again was as exciting as it was the first time, the zombies more terrifying and gory as ever with so much effort put into the movement and the AI behaviour, it felt like the pinnacle of zombie killing gameplay. Each zombie had strength, they weren’t easy to take down and Resident Evil 2 Remake makes sure that you progress through each level strategically with ammo and resources, you will not kill every enemy in a playthrough, sometimes running is the only option. Take Mr X for example, an almost immortal G-Virus monstrosity sent to destroy any police or civilian life by Umbrella to cover the event up. In Leon’s campaign, he is sent around mid-game time and walks around the Police Department with one objective, to kill you. It is impossible to kill him, all you can do is slow him down and that horror, that fear that he’s going to be hiding around a corner or waiting outside your safe room, really kicks your heart into high gear and it has been a long time since a game has managed that. Like Mr X there are many G-Virus monstrosities littered through-out and each one feels different from the other and provides one hell of a challenge and scare.

Puzzle sections in games usually put me off, I’ll be honest, I’m not one for puzzles but Resident Evil 2 Remake keeps them interesting throughout by making it feel so rewarding once a puzzle is done. Whether it be to find a safe code, match the icons up to open up a certain area, Capcom didn’t make the puzzles feel to in your face, they were spread out nicely and kept switching the gameplay up enough for none of it to end up like one big slog.

Anyone else had to replace their pants when they heard Mr-X coming? I think I need to go buy a whole lot more because Capcom nailed the sound design. Whether it be zombies screaming in the distance, doors being slammed open, Mr X’s terrifying footsteps, they’re all crafted so brilliantly I finally got scared by a video game again for the first time in so many years.

Resident Evil 2 Remake also uses the Resident Evil Engine, the same one that was used for RE 7. Each zombie looks the part and boy decomposition on there heads when you keep shooting at them is absolutely stunning to see. A lot of passion has gone into this game to make it look like one of the best games on the PlayStation 4, PC and Xbox One. Each boss has just as much effort put into as the zombies and honestly I could look at them for ages looking at all their unique details. Luckily in the bonus menu, you can view the models as you collect them throughout your playthrough.

We cannot forget the environment, each section looks so much different from the last, whether it be in the Police Department or Umbrella labs, each section has had so much time and effort put in and all I wanted to do was explore each and every little detail.

Resident Evil 2 Remake feels like it was made for us, fans of horror, puzzle lovers, action lovers you name it Resident Evil 2 has a little bit of everything for everybody. A total labour of love I felt at the end of it and it made me hope that Capcom will make a Resident Evil 3 Remake and it also keeps me hopeful about what could come for Resident Evil 8. Back when Resident Evil 6 was released, it felt like Resident Evil was over, the once big juggernaut of gaming has had its time. Capcom though recently has knocked it out of the park with its recent releases in the series. The old survival horror genre made a fantastic return to form in the Resident Evil 2 Remake and props to Capcom for really providing something worthy of Game of the Year material.

I also cannot wait to experience the new Ghost Chapters DLC that will be added in February for free and you can read more about that HERE.