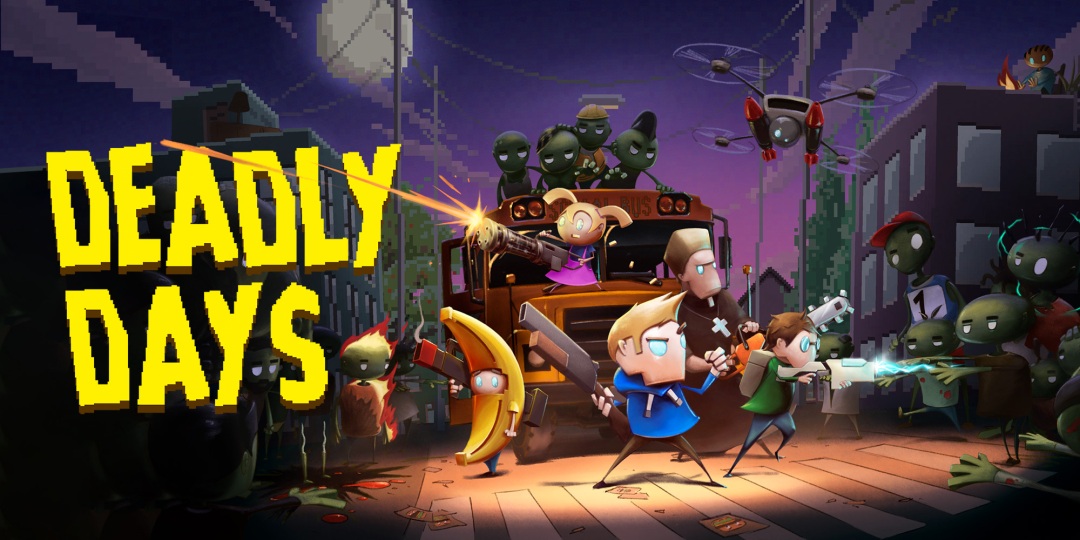 Deadly Days is a strategic zombie survival game developed by Pixelsplit and published by Assemble Entertainment. The game is now available on Nintendo Switch and PC.

In Deadly Days a burger restaurant gets a delivery of what seems to be tainted food, suddenly in a quite fun pixelated cut-scene zombies start pouring out of the restaurant soon taking over the once peaceful town. In Deadly days players are given random survivors with different starting weapons and costumes and must search for food to survive the next day and level up, scrap to build and upgrade and other survivors to build up a capable team to ultimately take down the burger places. This is a title where if your survivor perishes that is it, permadeath and I like that, it gives you more incentive to keep the characters you’ve spent ages levelling up. Each play-through gives you XP for new skills and abilities so dying comes with reward the more you play. I had spent ages in giving my first few survivors early on in the game some amazing weapons and built them up to be quite tough, sadly I didn’t keep an eye on my food and they all starved to death. While looting for food, scrap and weapons you must keep an eye on the timer, the timer lets you know when sunrise is because you do not want to be left in one of the many procedural generated environments at night, zombies will eat you, it’s tough to get to the bus without losing one or two of your people. I felt the timer was a bit harsh at times, especially at the start when you only get around 1 minute 30 seconds, it just never felt enough.

Deadly Days in a strategic zombie survival game, that means it’s similar to a point and click control style but on the Switch this time. It works fairly well I have to say, I had doubts at first but it truly does run well and responded to each action perfectly. The game doesn’t just rely on it for control scheme or style though, you truly have to be careful with resources and your survivors, if you don’t defend yourself properly, dead, run out of food, dead, don’t get to the bus on time an start the engine early enough, dead, you will have to carefully plan and quickly to make sure you’re in for what you needed and then out by the end. Again like mentioned before the timer is harsh but it also gives you an adrenaline boost and becomes quite exciting.

Deadly Days does what it sets out to do graphically wonderfully, it is a pixelated game which gives it that retro feeling, I’d say though in some of the procedural towns some things can look a bit familiar but overall the aesthetic of the game is pleasing to the eye. Sadly though on my Nintendo Switch, I was getting FPS drops in both docked and handheld modes. The audio design is pretty good when it comes to all the action but I found the soundtrack while fairly good to be quite loud and invasive sometimes. I feel a 16-bit style retro track would have gone quite well with this title.

Deadly Days is a wonderfully unique feeling zombie survival game with quite a lot of fun features and a ton to do. If you enjoy zombie games and using strategy I can’t recommend this enough. It does have a few issues but I imagine these will be patched out as the game has been receiving patches quite frequently which in my eyes shows dedication.