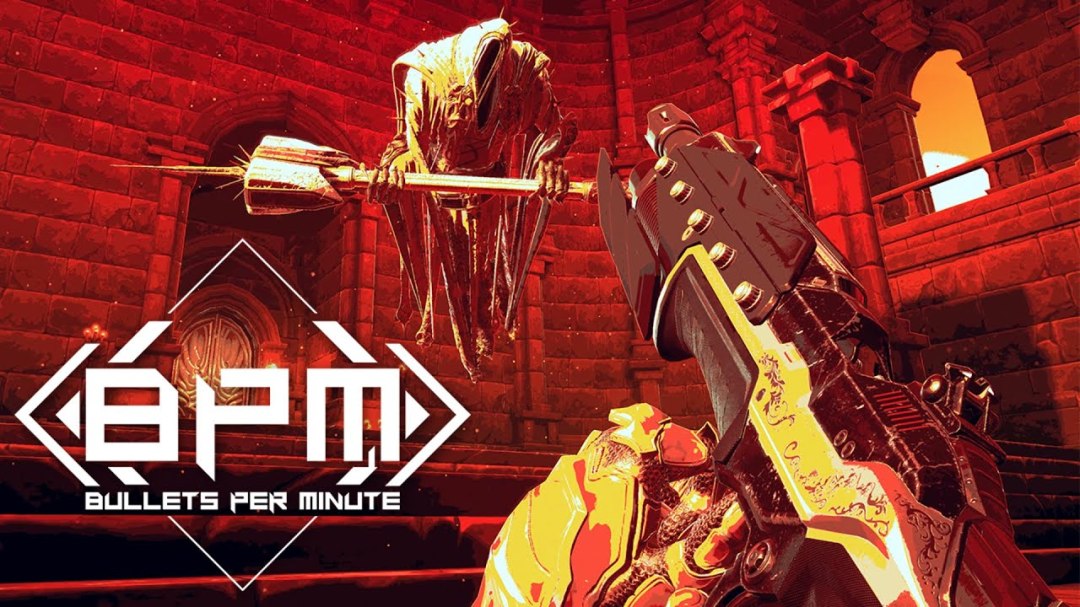 BPM Bullets Per Minute developed and published by Awe Interactive will release on PC, Xbox One and PlayStation 4 on the 15th of September 2020.

BPM Bullets Per Minute is Guitar Hero meets DOOM, sound strange? It works pretty damn well. BPM is a rouge lite shooter, you’ll traverse procedurally generated dungeons and come across different rooms every time, some rooms contain traps, some treasures, merchants, banks, challenge rooms and bosses. In my play-through I would enter every room to make sure I was ready for the boss fight, I struggled a bit at first, I had to find my feet as BPM uses an interesting system with combat. In BPM you must shoot and reload to the beat of the metal soundtrack, as you go the track will evolve and there’s something so satisfying once you’ve learnt the rhythm and start dominating the level. Each weapon reacts differently and you’ll have to learn how it acts and reloads to make sure you’re hitting the beat correctly every-time. For those who might fear it’s hard to shoot to a track, it provides a sort of beat metre on the crosshairs to enable you keep track of what it’s asking you to do, and trust me, it helps. Below is a trailer to show you how it all performs. As someone said in one of the YouTube comments of the trailer, meet DOOM: The Musical.

In BPM there is so much variety already in just the preview build that every game felt different, I was in love with the soundtrack, killing enemies to the beat was immensely satisfying, goosebumps every time, the way the dungeons opened up and the number of power-ups and weapons it was all just so perfect. Being an early build there were a few bugs but overall nothing game-breaking, it ran smoothly and it performed well when lots of different things appeared on the screen. The soundtrack is just so powerful and really pushes you on and I have to say when you beat a boss and you get to shoot him to someone shredding the guitar like Bill and Ted just arrived in there phone booth and played the most legendary riff ever, what’s not to love about this game?

I cannot wait till the full-game unlocks, it’s something different and new and I’m all for it. I need to get back to it and start the new levels, I want to try all the different characters, weapons and power-ups. I want to hear more sound tracks and keep going back for more. This is on my most anticipated games of 2020 purely because of how addictive and fun it is. With such replay-ability value and ways to take on each play-through, I can’t recommend this enough.