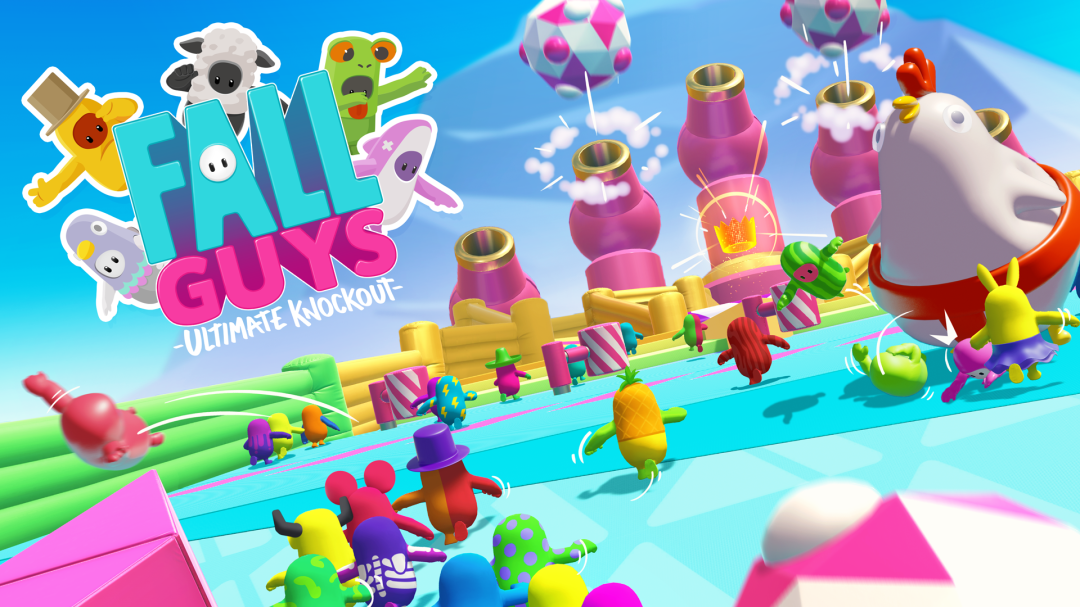 Fall Guys Ultimate Knockout developed by Media Tonic and published by Devolver Digital is now available on PlayStation 4 and PC.

Fall Guys Ultimate Knock out is a battle royale title that takes place in a game show similar to Total Wipeout, Ninja Warrior and Takeshis castle. 60 players battle it out in solo rounds with obstacles courses, each level containing different kinds, team battles in which you must defeat the opposing teams to get ahead and other mixes of rounds both solo and team. The overall objective is to win, usually, there are around 5 rounds that each mix it up and you’ll either qualify or be eliminated each time, once you’re in the final it can get pretty tense but it’s a jolly good laugh. My favourite final round has to be the hexagon one where you have to avoid falling to the bottom to avoid losing, it’s a good laugh but gut-wrenching when you’re so close but you fall 3 or 4 levels into the slime. Sadly my least favourite game modes are the team ones, you could be doing so well but if your team fails, so do you or you could be letting the team down, it’s something I wish you could choose to do. I’d like it if there was a solo mode games only choice or a team only and for those who like a mix just make a game mode called random. Perhaps in the future that will happen.

Fall Guys works incredibly well gameplay-wise to just throw the genre into a new direction, most battle royales are shooters nowadays but bringing in a game similar to much-loved game shows from reality is perfect. The game provides so many tense moments where things start speeding up the further you progress, you’ll laugh, you’ll rage at the blue teammate taking the ball TO THE WRONG DAMN CORNER! Overall Fall Guys is a joy to behold. The controls are simple to pick up on both the PlayStation 4 version and PC version with move, jump and grab being the basic controls with an added dive if needed. It feels like a game that is very accessible to all ages whether you’re child, adult or elderly. The gameplay premise is so simple as-well that casual gamers will love it and so will hardcore. One of my favourite aspects is the costumes, yes there is the dreaded microtransactions but at the moment you’ll earn a fair amount of purple coins to buy the latest customisable available, getting crowns are done using the season battle pass system but no extra money is required for the full battle pass, it’s free. Crowns will unlock special and epic customisable and you can also win them via winning a show which like I said to my partner, I don’t feel like Fall Guys Ultimate Knockout is something you need to be an expert at, I think it’s just a lot of fun and sometimes you’ll make it and sometimes you won’t. The only problems so far that have cropped up are server launch issues but that can be down to so many players jumping all in at once and I see that as good thing, it was fixed fairly quickly and patches are incoming, sometimes you can’t know how many people will genuinely join and I think Media Tonic was surprised at how this game took off.

Fall Guys Ultimate Knockout looks beautiful, cartoony and quirky and fits with the theme of the game being set in a crazy TV show with bizarre costumes, yes I am a Raptor with a Pigeons feet and tail. The game runs flawlessly on the PlayStation 4 pro at a solid 60fps and during the beta Steam version, it ran great on a 2060 RTX card. The music also perfectly fits in with each round and only adds to the overall experience you’ll have. The Fall Guys themselves sound quirky and daft but also the design both graphically and audibly makes them lovable.

Fall Guys Ultimate Knockout has to be one of the best games of this year, it’s fun, it’s creative, it does something new with a genre we see a ton of and I like that. I’ve laughed a lot, it’s a ton of fun, I don’t like team rounds but it is so funny at times. I am hooked, I didn’t want to get off and do this review, I just wanted to keep on going. Media Tonic and Devolver Digital have created something special and I am in it for the long haul! If you want to check out some gameplay you can watch the video I filmed below: