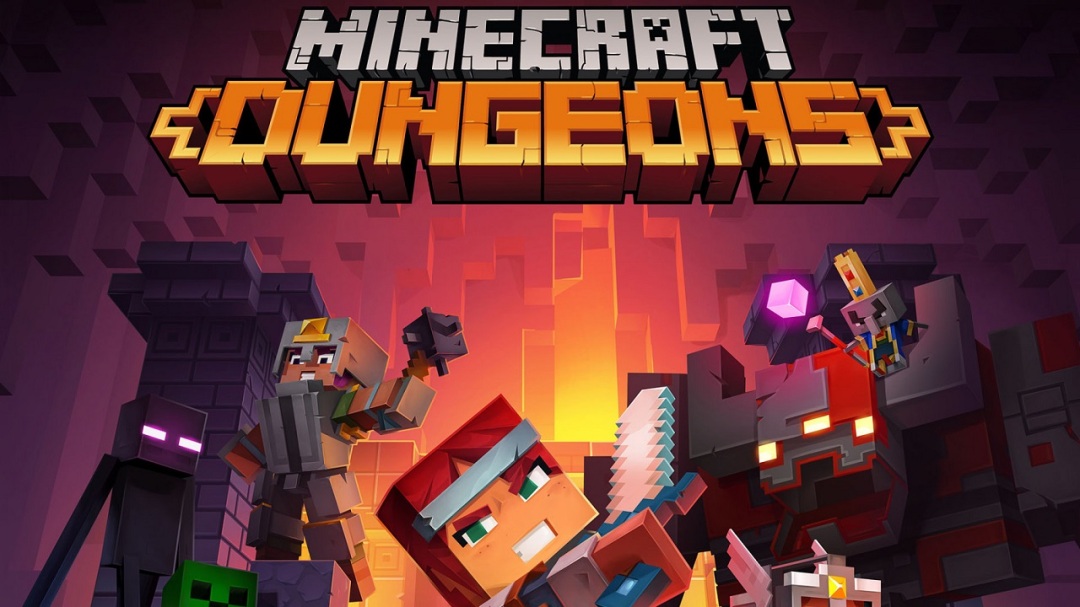 Minecraft Dungeons developed by Mojang Studios and Double Eleven is now available on Nintendo Switch, PC, Xbox One and PlayStation 4.

You are the Hero, you must put a stop to the evil illager that has ravaged the realm with his new-found evil powers after being shunned by everyone, you’ll travel across many different and beautiful landscapes that are different every-time you play trying to put an end to his reign. The story in Minecraft Dungeons has you exploring beautiful locations and fighting waves of undead, illagers and other well known Minecraft creatures including some new ones to add to the Dungeon Crawler styled game-play but each one seems fitting within the Minecraft lore. I enjoyed each of the cut-scenes showing and explaining what had gone wrong and how you can save it, little details like that gave each level a little back-story which is I feel an integral part of level design to give you a little bit of narrative going forward. Minecraft Dungeons story can be completed in around 8 hours, less if you rush it but it has a lot of replay-ability as you can keep levelling up, finding new loot, going on harder difficulties for bigger rewards and as each level is procedural, you never feel like you’re playing the same level twice. I didn’t feel that it was too short, for around £15, the game feels like it’s full of content and worth playing over and over. I feel like Minecraft Dungeons is going to be a game I’ll go back to more than once.

The gameplay of Minecraft Dungeons is extremely similar to that of the Diablo series but honestly, that’s a really good thing, before I went into this I thought, with Minecraft how many different weapon, armour and artefact variations can there be? It turns out, a lot. The game entices you back in by giving you rare and unique items with a lot of great possibilities and the chance to mix and match your class that suits your play style. I enjoyed trying to get the best loot I could. When you level up you’ll earn enchantments that you can put on weapons and armour to give you new skills and buffs, my favourite was dual daggers with increased speed and lightning that chains from enemy to enemy damaging those all around, my favourite artefact had to be the one that gives you a trusty and powerful pet llama. Each item you have creates a power level, each power level determines what difficulty and what stage of the level you’ll play and also lets you chose if you’d like to increase it for reward’s sake, or lower the difficulty so it’s an easier time, but you’ll sacrifice a bit of loot doing that, but sometimes it’s needed. It did take a little while for me to get into the game, I played it solo, you can play with friends, family loved ones on the sofa or online but I went solo and it’s still fun but I feel it would be much better in multiplayer. When you’re low level I didn’t feel that I got to experience the fullness of the game but as I kept going I started loving it more and more and in the end, I fell in love with it. There are a few bugs with AI pathing and ragdolls freaking out but nothing too serious that ruined the experience. I will say though the PC controls using the mouse for movement isn’t great, I tried to do it but couldn’t, I ended up plugging the Dualshock 4 controller in and it was much better.

The level design in this is so beautiful I wished that Mojang would incorporate similar biomes, areas and design that Double Eleven did in Dungeons. Each of the enemies sounds like they do in the Minecraft World, the music fit the themes and was a joy to listen to, every little bit of this game feels like it was designed with heart and that’s why it’s up there as a great title in 2020. I loved what they managed to pull off with the Unreal Engine and if there is more content coming, I can’t wait to explore what they’ve created. The procedural generation of each level also makes it interesting to explore every corner of each World due to such a fantastic design. The game runs smoothly and doesn’t require an overly powerful PC to look beautiful.

Minecraft holds a special place in our hearts in this house, it’s how we met online and became a family. I had hoped that this would expand that Universe more and help Minecraft grow and it did. At first, it took some time to get used to, I had to plug in a controller in the end but I fell in love with the game and I just want more. I never felt that it was to short and I think for the asking price it’s one hell of a game stuffed full of great content.